eTrac has conducted three hydrographic surveys of the USS Arizona since 2014 to create an accurate 3D model of the wreck as well as monitor the ongoing erosion of the wreck. One of the challenging aspects of this survey was collecting multibeam data under the USS Arizona memorial structure. The lack of satellite coverage necessitated using a high precision inertial navigation system (INS), and the low vertical clearance of the memorial structure required the use of an unmanned vessel. To fulfill the survey specifications, eTrac designed and built a low profile RSV capable of carrying a payload of the highest precision hydrographic survey equipment in order to create a high density point cloud for 3D modeling. The RSV was mobilized with an R2Sonic 2026 sonar and Applanix POS Oceanmaster motion and positioning system. 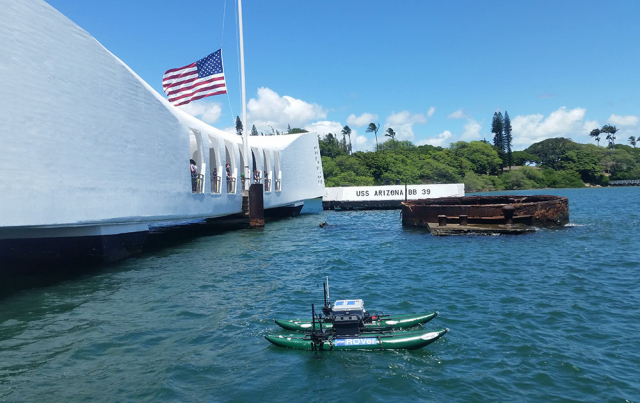